The Washington Post
This composite image of eleven pictures shows the progression of a total solar eclipse in Madras, Ore., on Monday. (Aubrey Gemignani/NASA)

The 2017 solar eclipse is now history. If you missed the big event or, like me, regret not traveling to the path of totality to watch the sun go completely dark, not to worry — you’ll have another chance in less than seven years. The United States will see its next total solar eclipse on April 8, 2024.

Play Video 0:45
How do scientists know when and where an eclipse will happen?
Capital Weather Gang’s Angela Fritz explains how math is used to determine the timing and location of the total solar eclipse that crossed the U.S. on Aug. 21. (Claritza Jimenez, Daron Taylor, Angela Fritz/The Washington Post)

Whereas this year’s eclipse traversed the country from coast to coast, the 2024 eclipse will travel northeastward from Texas to Maine. Dallas, Little Rock, Indianapolis, Cleveland and Buffalo are among some of the major cities in the next path of totality. A few lucky places that saw Monday’s total eclipse will see one again in 2024 — notably Carbondale, Ill., which has been dubbed the eclipse capital of the United States.

Since the 2024 eclipse will happen in early spring — when the weather tends to be more unsettled — clouds could be more of a spoiler, especially in northern areas such as Upstate New York and Maine, as this map by Brian Brettschneider shows: 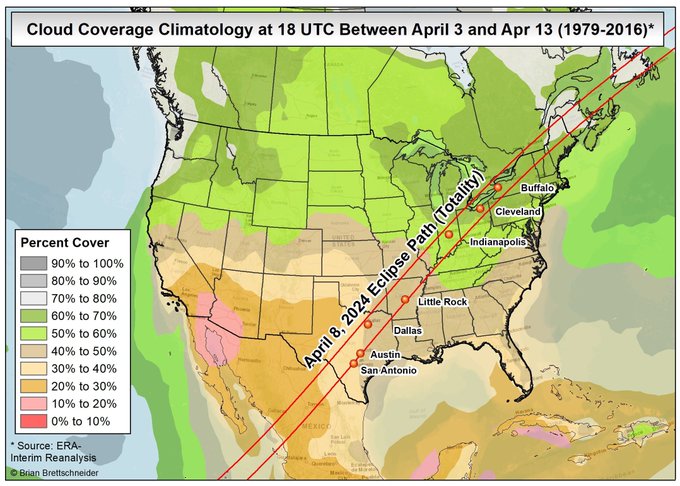 Of course, it’s way too early to even think about the weather forecast now!

[Here’s every total solar eclipse happening in your lifetime]

The United States will also see an annular solar eclipse on Oct. 14, 2023 — just six months before the 2024 total eclipse.

Annular solar eclipse seen in Australia in May 2013. (Geoff Sims/PerthWeatherLive.com)

During an annular eclipse, the moon is farther from Earth in its orbit, so its shadow isn’t large enough to fully obscure the sun. Instead, the sun’s outer edge remains visible, causing what’s known as a “ring of fire” effect.

The 2023 annular eclipse will be visible across six western statesstretching from Oregon into southern Texas, as well as parts of Central and South America.

If you miss the next total solar eclipse in 2024, there won’t be another in the contiguous United States until August 2044. The path of totality will cross only a small section of the northern-central part of the nation — from western North Dakota into Montana — before curving northward into Canada.

The good news is there will be a more widely seen total solar eclipse the following year. On Aug. 12, 2045, a total solar eclipse will traverse the country from coast to coast, much like this year’s. Compared to 2017, the path of totality will be wider and farther south, stretching from northern California to central Florida. Due to its wide path, totality will last about six minutes — more than twice as long as this year’s eclipse — according to NASA. The 2045 eclipse will be the nation’s last coast-to-coast total solar eclipse happening this century. There will, however, be five other total solar eclipses that will cross smaller sections of the country — in 2052, 2078, 2079, 2097 (visible in Alaska only) and 2099.

Whether you’re a veteran eclipse chaser or this year’s eclipse has turned you into one, keep in mind that total solar eclipses aren’t quite as rare as you think. You may just have to travel a little ways to see one in your lifetime.

Selena Gomez Says It Would Have Been a “Distraction” if She’d...

Why Interstellar Travel Will Be Possible Sooner Than You Think

Buddhist Monks in China Have Offset 40 Million Tons of Greenhouse...

How Does a Dead Bat End Up in Packaged Salad?

D.C And Maryland To Sue Trump over Breach of Constitutional Oath