Upon learning that President Donald Trump’s new administration had removed the web page on climate change from the White House’s site, climate scientists were dismayed, though not necessarily surprised.

“It is too sadly predictable,” Michael Mann, a distinguished professor of meteorology at Pennsylvania State University, told Live Science. “Though I tried to give him the benefit of the doubt early on, Trump has now clearly telegraphed, with his public comments and his disastrous nominee[s] for key posts, his total disdain for efforts to avert catastrophic climate change.”

When Trump took office today (Jan. 20), the White House’s website, whitehouse.gov, underwent a major makeover, in which the page on climate change action that was set up by Barack Obama’s administration (archived here) now reads, “The requested page “/energy/climate-change” could not be found.”

Perhaps in place of this climate change page, the Trump administration has set up a page describing the “America First Energy Plan.” In the plan, the White House states, “President Trump is committed to eliminating harmful and unnecessary policies such as the Climate Action Plan and the Waters of the U.S. rule.

The new policy is “not really surprising,” given Trump’s past statements, but “it’s disappointing,” said Kevin Trenberth, a distinguished senior scientist at the National Center for Atmospheric Research in Boulder, Colorado.

“It seems to be all about the need for energy and tapping all of the available sources without any regard to the effects of that on the environment or on the climate — and no regard, either, to really becoming more energy efficient,” Trenberth told Live Science.

“It doesn’t take into account the nonrenewable nature of these resources,” Trenberth said. “Just to say that you a have a lot of them doesn’t really help.”

Moreover, if such technology were developed, it would likely create a sense of complacency toward climate change, Pushker Kharecha, a climate scientist at the Earth Institute at Columbia University, told Live Science in October.

“In my opinion, the top priority of emission-reduction efforts should instead be switching to nonfossil energy sources (renewables and nuclear) by as much as possible and as quickly as possible,” Kharecha said.

Other scientists, as well as celebrities, also weighed in on the disappearance of the climate change page.

Meteorologist Eric Holthaus tweeted “It begins. The first agenda item up on the new @whitehouse site is to ‘eliminate … the Climate Action Plan.'” 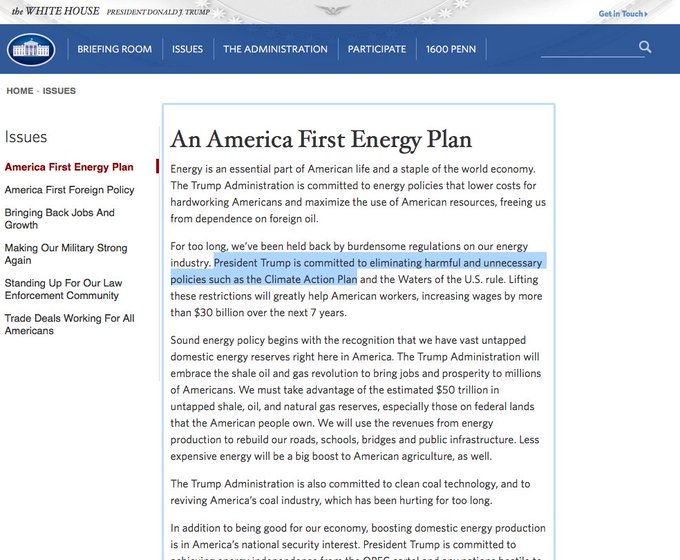 Starbucks secret menu the drinks you didn’t know you can ask...

TRUMP: Everyone is ‘getting rich’ from the stock market except for...

Has the original Santa Claus been found in Turkey?